The United States ranked 9th globally with an average total score of 52.

The public disclosures of the five largest pension fund organisations were reviewed. All organisations reviewed manage funds backing the pension entitlements of public sector workers. The United States has a large, mature and fragmented pension market. Many states as well as some counties and municipalities have one or more plans for their public sector employees. Private sector pensions are provided by employers or employer/employee associations. On a federal level, social security provides retirement and other benefits, paid by a combination of payroll taxes and a reserve fund.

Disclosures of American public pension funds are heavily influenced by GASB standards and the disclosures required as part of their Comprehensive Annual Financial Reports (CAFR’s). American systems scored first overall in performance disclosures but did less well in other areas, 9th in responsible investing, 10th for cost, and 11th for governance disclosures.

With an average cost factor score of 41, American funds ranked 11th. Individual scores ranged from 24 to 59. Similar to governance and responsible investing, the CAFR’s did not provide much relevant cost information. Disclosure of transaction costs was particularly poor with only brokerage fees being disclosed by any of the funds reviewed.

The funds did somewhat poorly on this factor with an average score of 47, 11th in the global rankings. Scores ranged from a low of 31 to a high of 59. Governance structure disclosures were good enough for fourth in the rankings, although it was often necessary to refer to several documents and/or web pages to find all relevant information. Compensation, HR and organisation disclosures were particularly poor. The US was one of four countries where there were no disclosures on board compensation and one of two countries where this was combined with no management compensation disclosure.

Performance disclosures for the American organisations received the highest average score of 87, ranking 1st overall. Individual fund scores ranged from a low of 79 to a high of 94. There was a lot of information disclosed across all components, but it was not always done in the most cohesive and convenient manner. Unfortunately, it was often necessary to refer to several documents and/or web pages to find all relevant information.

This was also a weak factor for the American organisations. The global rank was 10th with an average score of 35. There was a wide disparity in the scores, from a low of five to a quite respectable 64. Disclosure of responsible investing frameworks was the highest scoring area. All five organisations included RI as part of their mission/vision/overall fund strategy. Conversely, few organisations disclosed exclusion policies.

CalSTRS Comprehensive Annual Financial Report 2019 includes a table with asset class and related benchmark returns for 1, 3, 5 and 10-year time periods. The returns are clearly stated as net of investment fees and time weighted, including a more detailed description of the TWRR calculation. The detailed footnotes to the table describe the asset class benchmarks. 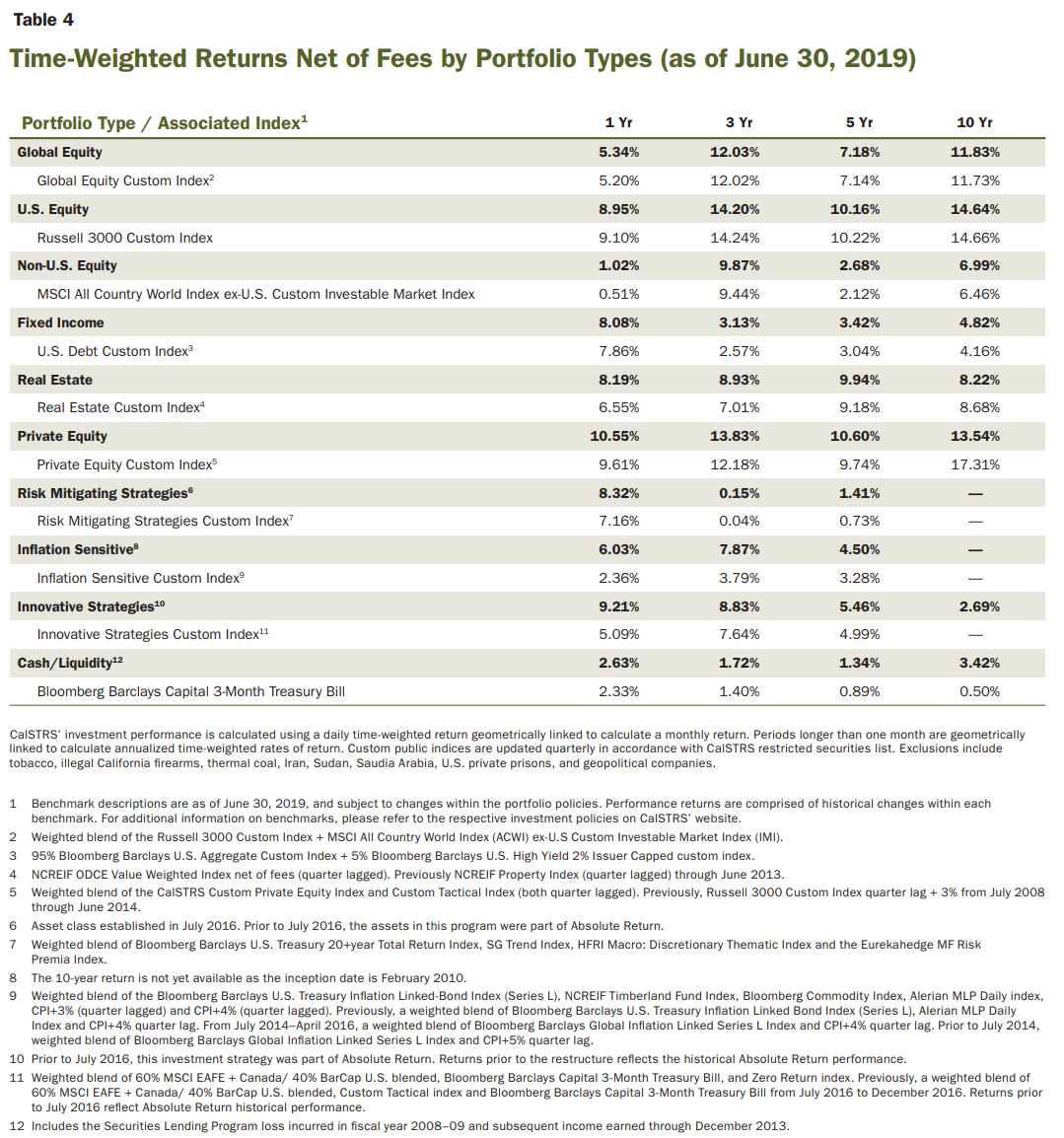 CalPERS is the largest defined benefit pension plan in the US and provides retirement benefits to certain public employees of the state of California. CalSTRS is the largest single profession pension plan in the US and provides pension benefits to educators in the state of California. The Federal Retirement Thrift Investment Board is the largest American pension fund manager by assets under management. It administers the Thrift Savings Plan (TSP), a tax-deferred defined contribution plan similar to private sector 401(k) plans which provides federal employees the opportunity to save for retirement.